What I told the Navy about being Gay 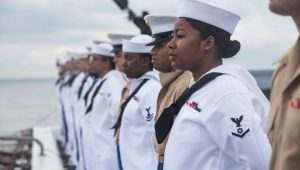 For Pride month 2022, I was asked by Chief Petty Officer Ronald Meija, Commander of Mine Division 12, San Diego, to speak to a group of Navy sailors about “the history of the struggle of gay people and the hope of an inclusive, tolerant future in our country.” That’s quite a topic to cover in 45 minutes! But, I like a challenge, so I said, ”Sure”.

Of course, no one person can represent millions of LGBTQ folks. What can I, one gay man, say to this group of military men and women about being gay, and, more importantly, what do they want to know? What would be useful for me to share with them? This is the real question. What do (assumedly) heterosexual people need to know about us, the LGBTQ people of the world?

I was born in 1953 in a small town in Ohio. Most of you weren’t around then, so imagine LGBTQ life almost 70 years’ ago: back then, the word “gay” meant “happy”. Same-sex loving men were “homos”, “queers” or “fruits” as I remember hearing from the adults around me. I wasn’t a very macho boy: I didn’t like hunting and killing animals, but I did like fishing. I didn’t like playing sports but I did like automobiles. I liked art, reading, animals (dogs, cats, horses, snakes, turtles, fish, etc.) and riding my bicycle all over the county’s back roads.

There were no healthy LGBTQ role models that I can remember. The few books I found that mentioned us “homos” described us as pitiful deviants whose future was abysmal. We had no chance at normal happiness and were expected to slink away from decent, God-fearing heterosexual society and not bring our dirty minds anywhere near their white-picket fenced lives.

That personal history is some of what I told the Navy. But, I didn’t stop there.

As LGBTQ kids, few of us had parents who were just like us. Most of us had heterosexual parents who had no clue about who we were. We were raised by people who could not help us prepare for an LGBTQ adulthood in a predominantly heteronormative world.

This hit the Navy group like a big ole whump upside the head. They’d never thought about how hard it would be to be raised by people who have no idea who you are and few ideas about how to help you thrive as an LGBTQ child, teenager and young adult.

LGBTQ kids born now have many more resources to help them. Even if you’re from a rural area, as I was, now you can Google all the information you need and join online chat and support groups. In 1953, you were pretty much on your own.

If you are an LGBTQ person with heterosexual parents, what was it like to be raised by people who had no clue about who you were or how to help you? And what can you do about that today?